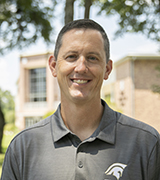 Chris McClanahan was named Head Football Coach at The Woodlands Christian Academy after joining the program as Defensive Coordinator before the 2020 season. His personal mission is to be a servant leader for the TWCA community, act with faith and integrity and to have a significant impact towards the success of all Warriors. His vision for Warrior Football is to build a championship TAPPS program with high academic expectations and intelligent ball players on the field. “Coach Mac” also seeks to culturize a family environment of successful multi-sport student-athletes who embody “Honor, Courage, and Team!” competing from August to June.

Coach McClanahan is a 21-year career educator having invested nineteen years in the classroom and on the field in addition to two years as a building administrator. As an Offensive Coordinator at Houston Lamar and Fort Bend Hightower, Coach Mac guided top scoring offenses resulting in four District Championships in five years. Prior to returning to Hightower, he was the Special Teams Coordinator at Alvin High School and coached the defensive line that anchored the #3 defense in the district. As the Special Teams Coordinator at Katy Seven Lakes, he assisted in building a new football program from the ground up into a playoff team and winner.

In his first year at TWCA, Coach McClanahan helped the Warriors finish third in District 4 after the program jumped up to a higher level of competition in TAPPS Division II. After his arrival, football participation grew by 25% and the Warrior defense showed marked improvement over the course of the season - holding opponents to an average of 17 points per game over the final stretch of the regular season. Five members of the Warrior defense received All District 1st or 2nd Team honors, and two were named to the TAPPS All State Team.

Coach McClanahan is married to Cindy and they have four daughters: Megan, Amber, and twins Kelci and Kacie. In his spare time, he enjoys cooking, running, dabbling in art projects, and hanging out with his girls. He is a native of Galveston, Texas, played at Ball High School, and graduated from the University of Texas. Coach McClanahan earned his master’s degree in Educational Administration from Lamar University in 2010.

Tweets by twcasports
Powered by Finalsite